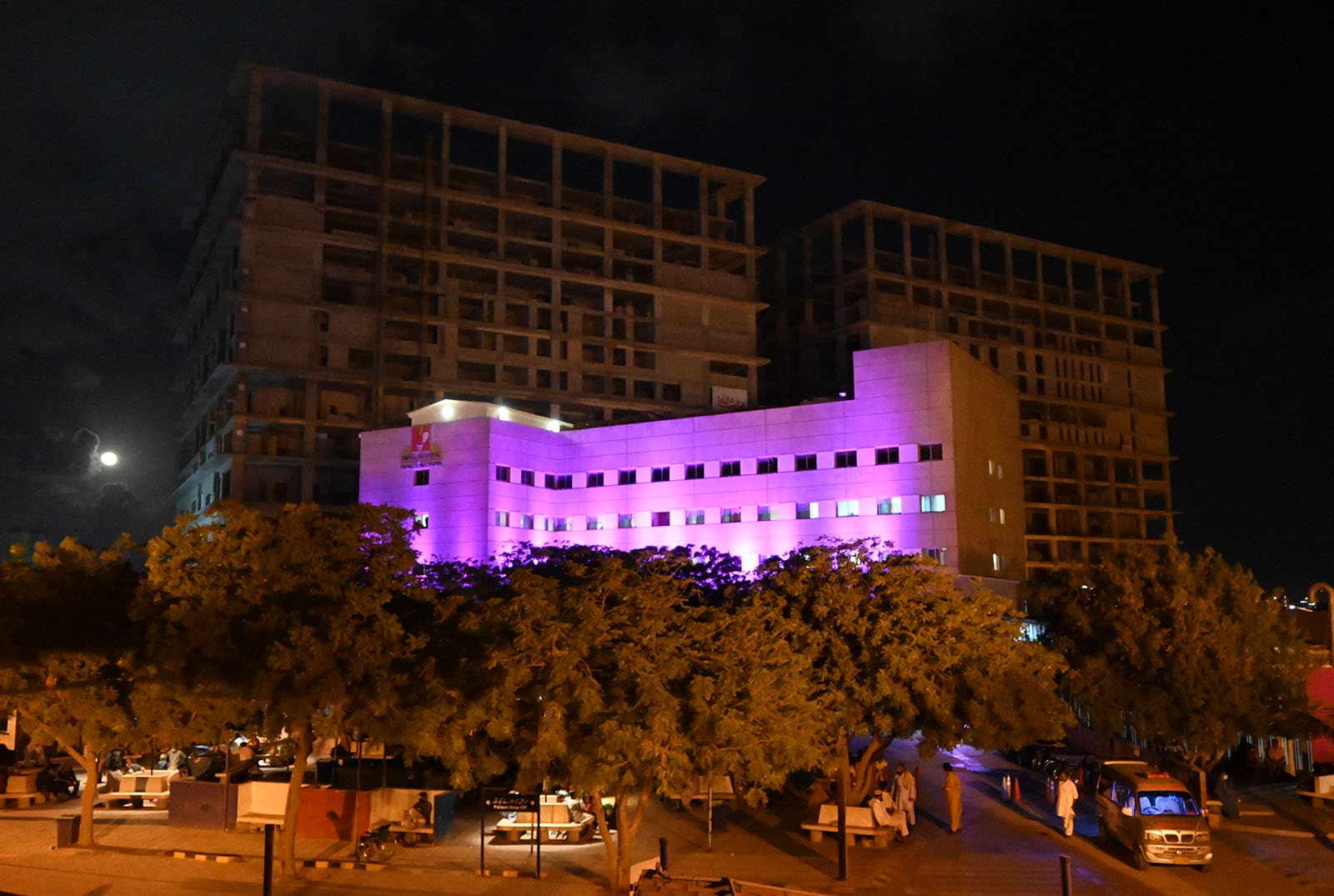 Rangoonwala Trust supports Indus Hospital by donating funds for the construction of their new building and facilities.

These developments also include access roads leading to the facility along with the proposal for the construction of two new bridges; the first bridge has already been built; while, design work is in progress for the second bridge. The construction work on all five (5) components of phase 1 have been triggered. 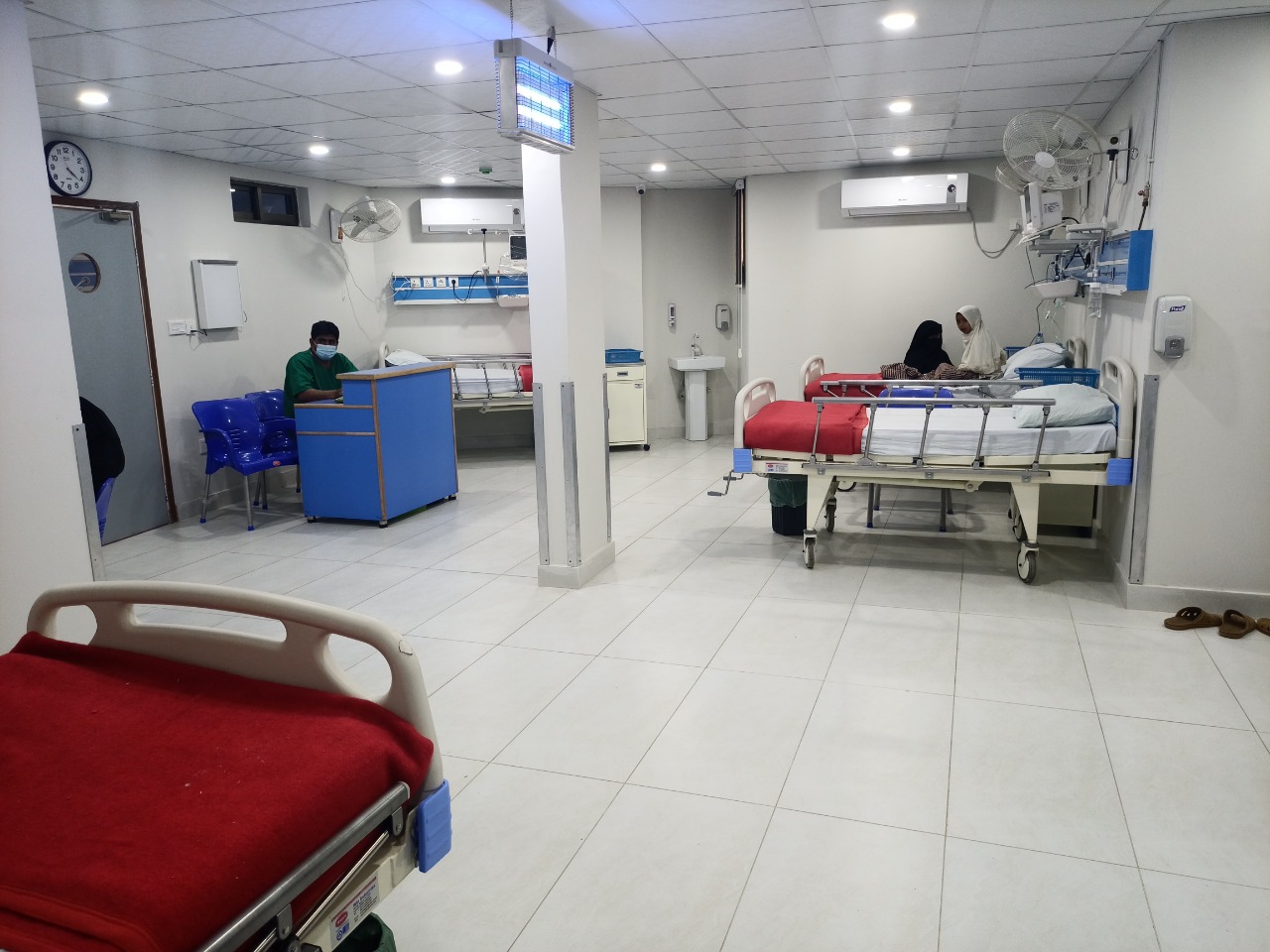 An agreement with Rangoonwala Trust and Jamal Noor Hospital was made on 17th November 2009.

Jamal Noor Hospital was established in 1967 as a small maternity home and since then Alhamdulillah has advanced to a 100 bedded modern Hospital providing primary and secondary care to the patients. It has state of an art ICU unit (Intensive Care Unit), NICU (Neonatal Intensive Care Unit), and three well-equipped Operation Theatres, serving the local community as well as needy deserving people qualifying it as a charity Hospital. We have an established diagnostic center having a 24-Hour state-of-the-art Clinical Laboratory, and Ultrasound and X-Ray Department. The Hospital Caters to about 13,804 Out-Patients, as revenue patients and approximately 331,286 Charity Patients. 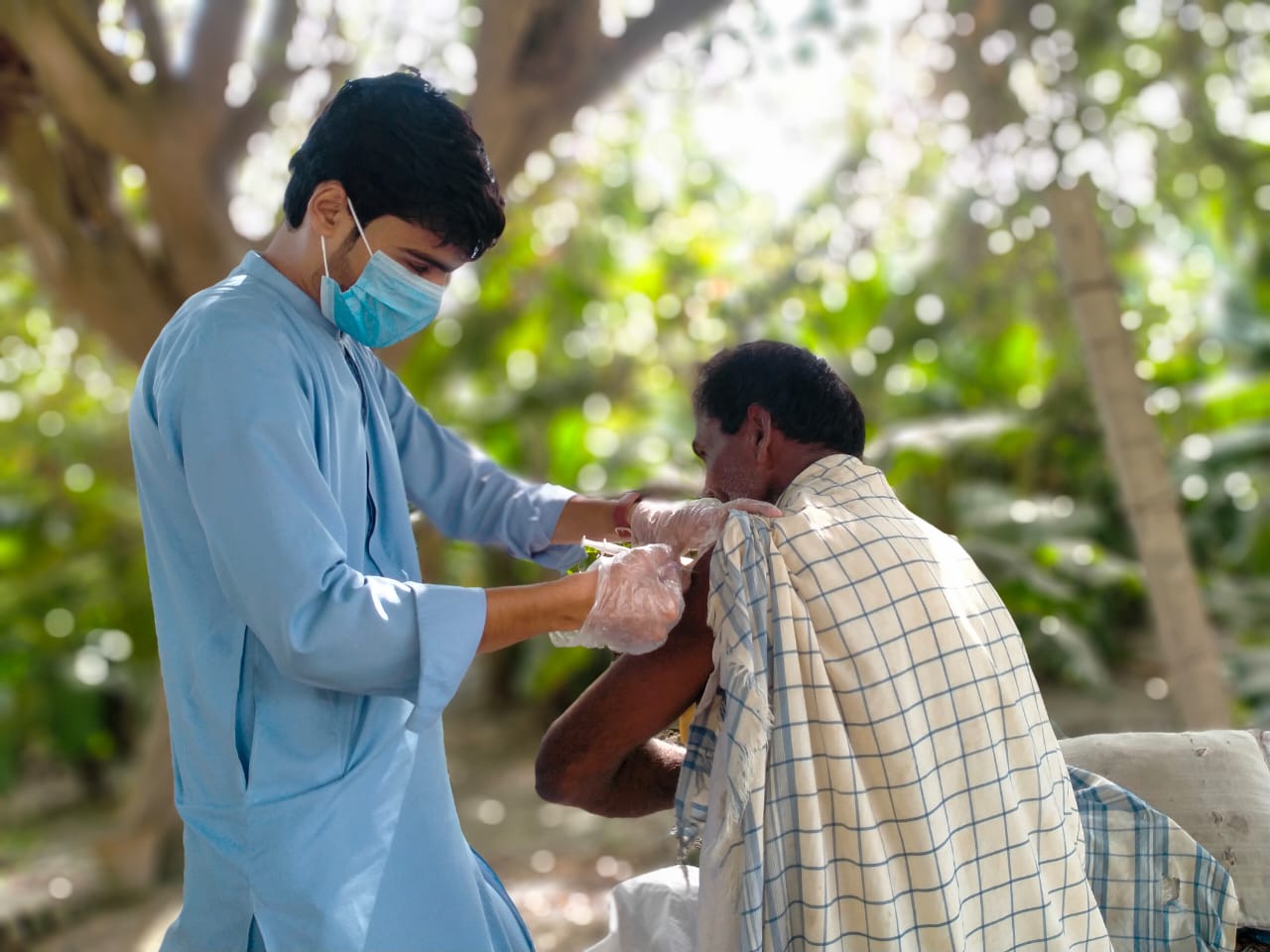 The Health Foundation aims to create awareness and promote healthy practices for the management of various diseases in the general public, with an initial emphasis on Hepatitis B and C.

They have set two immediate goals. The first is to educate the general public regarding the manifestations of Hepatitis B, Hepatitis C and their mode of acquisition and transmission. The second goal is to provide financial support to those suffering from these infections, but unable to afford the expense of their cure. This support will be in terms of medication supplied. Since there is a vaccine available for protection against Hepatitis B, THF is pursuing an immunization program in this regard. 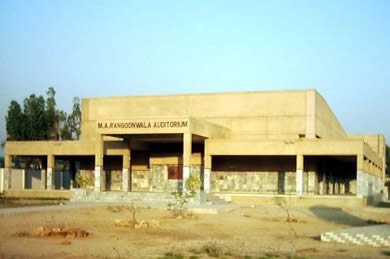 RLAK Govt. College of Home Economics, Karachi, besides imparting education in the field of Home Economics is also promoting the subject through regular seminars, lectures, conferences, etc. Besides, other academic functions such as annual exhibitions, displays, prize distribution ceremonies, college days, parent-teacher meetings, etc are also some of the features which take place in the college. Ironically the college had no presentable hall/auditorium or sizable room for arranging such functions. Considering the genuine difficulty and on the requests of Sind Education Dept. and the then Principal Mrs. Zubaida Mairaj, our Trustees after evaluating the situation and acute requirement of an auditorium for the college, very kindly agreed to contribute to the construction of an auditorium at RLAK Govt. College of Home Economics. 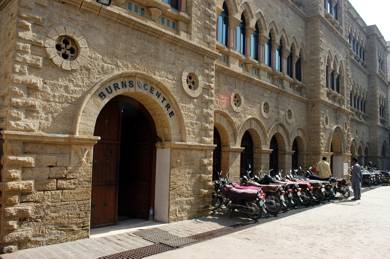 Burns Center, Civil Hospital Karachi deals with the patients of third-degree burns referred from the Burns Ward of CHK.

The BC is operating in a satisfactory state since Jan 2005. The Management of BC is putting good efforts to operate according to International Standards. Consequently, our Trust is receiving periodical reports from the Centre on its progress/activities. 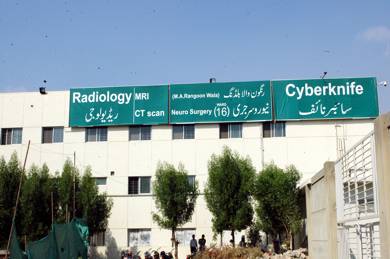 The Department of Neurosurgery at JPMC is one of the oldest of its kind in South Asia. Patients from Sindh, Baluchistan, and even other parts of Pakistan are served. Over the years, due to an increase in the number of patients the JPMC devised a scheme to construct a ground plus two-floor building for this purpose and approached the Rangoonwala Trust for donation. An agreement was signed between the JPMC and the Trust on 30th June 2004 for ground plus two-floor building. Covered area 69000 sq ft. This building lodges the complete Neurosurgery department with wards – ICU and DTS. It has a state-of-the-art Radiology Department. 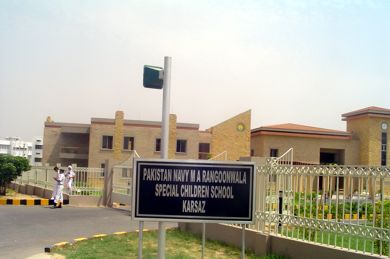 Pakistan Navy was running a small special children’s school since 1993 in PNS KARSAZ. In 2001, the Commanding Officer Karachi & Commanding Officer PNS KARSAZ with an aim to extend and develop the setup of the Special Children School and for providing a better environment for Special Children with facilities of International Standards approached our Trustee Mrs. Banu Rangoonwala and requested to help for the noble cause. Our Trustees very generously accepted the request and in 2004 agreed to contribute to the noble cause. In 2005 the building got completed in record time.

In recognition of the timely support from the Trust, the authorities of PN very generously named the newly established building of the school “Pakistan Navy M.A. Rangoonwala Special Children School”. The inauguration ceremony of the school took place on 26 August 2005.

On 24 May 2007 our Trustee Mr. Tariq Rangoonwala visited the school and approved a bus for the school bus for pick & drop off students. 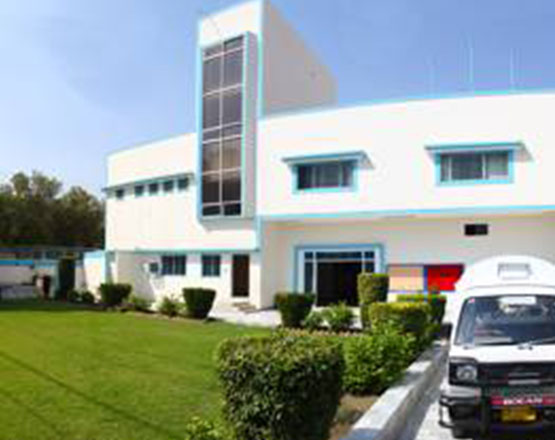 The M. A. Rangoonwala Centre, Hyderabad is another contribution to the Trust’s main aim of “Serving Humanity”. This center is the first of its kind in Hyderabad and is serving not only the residents of Hyderabad but also the adjoining areas.

A two-storied building situated on the main highway opposite Rani Bagh. The classrooms are fully furnished and equipped with the latest equipment used in vocational training courses. It started its operations in June 2003.

Presently the Trust has allowed the Deaf Reach Institute to run its classes for the deaf including vocational training during the morning. The Trust’s vocational for ladies runs in the afternoon. The entire exchequer goes to Deaf Reach. The building is also provided to them gratis. 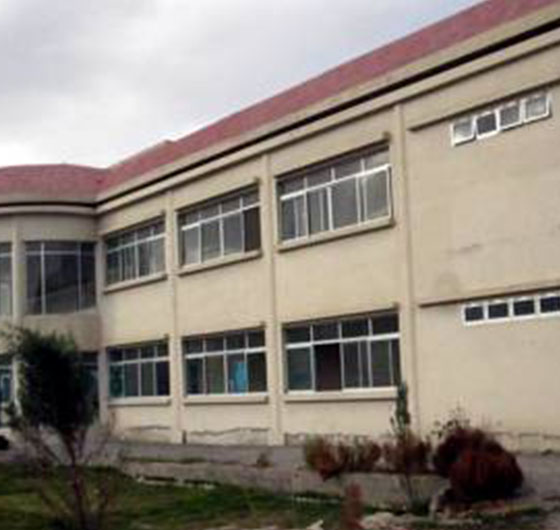 Helpers Association of Pakistan (HAP), Quetta was founded in 1978. This not-for-profit NGO established its first ‘Helpers School’ in Quetta in 1979. In 1981, it started a 200-bed Eye Hospital in Quetta & has handed it over to the Civil Hospital. Presently it runs, Helpers Schools in Quetta, Chaman, Naushki, and Panjgoor. An Intermediate College, English Language and Computer Institutes in Quetta.

To establish the M.A.R. & Helpers Community Centre for Vocational Courses in Quetta. The Land for this project has been provided by the Helpers Trust on nominal rent. The Construction of the Community Centre (14230 sq. Ft) and its complete furnishing was done by the Trust.

The M.A. Rangoonwala & Helpers Community Centre, Quetta was completed in January 2010 and started its operation in February 2010. It was run by the Trust for a few years and the staff was trained at Rangoonwala Centre, Karachi. Presently the Helpers have started a girl’s school in the morning and the vocational classes run in the afternoon. Future plan is to open a Home Economics College, which is very much required in Balochistan. 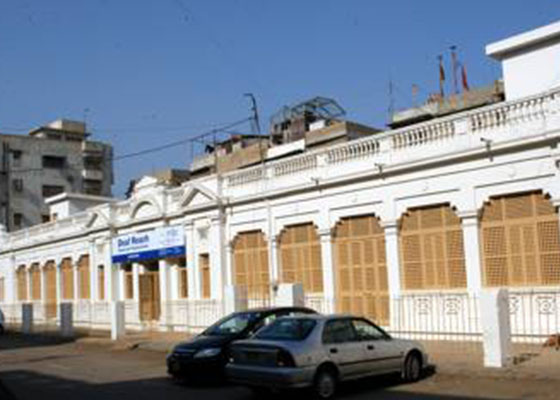 An agreement was signed between ZVMG Rangoonwala Trust & MLTII on 21st October 2005 according to which funding of the Project for its refurbishment, equipment maintenance, and operations was borne by the Trust. The Rangoonwala Trust renovated the Institute and started operations with the same courses offered at Rangoonwala Centre in 2006. Presently Deaf Reach is also running classes for the deaf in the morning.